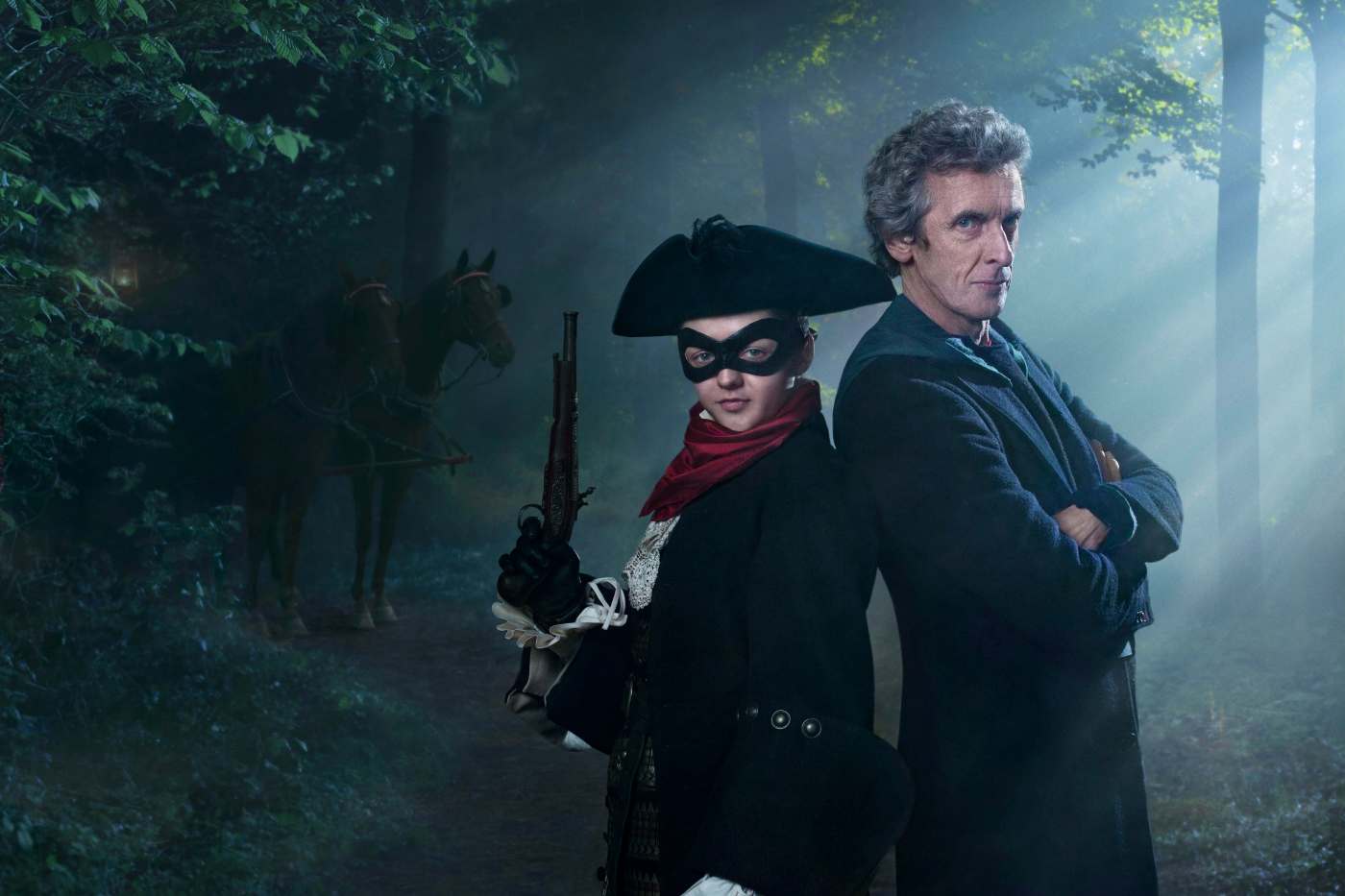 Welcome to another installment in the Living Authors’ Society Doctor Who Discussions! This week, J.A. Prentice (JA) and Jaden C. Kilmer (JC) discuss The Woman Who Lived. After our disappointment with last week’s episode, how did we feel about this one? And will we finally not agree about something?

Read on to find out. Be warned. There are SPOILERS below. Continue at your own risk.

JA: Overall thoughts?
JC: No Clara, closest thing we’ve had in years to a pure historical, and dick jokes. I loved it.
JA: I liked it a lot more than last week although I still had some major issues.
Mainly the alien menace really not working. At all.
For the second week in a row.
I think this episode would have worked better as more of a historical and I don’t think it would have had to change that much.
JC: I agree, but I’m sure BBC is somehow contractually obligated at this point to have an alien appear somehow in their stories. That’s my one complaint, and it’s not huge this week because, unlike last week, I don’t think the story was ABOUT aliens attacking. It was about me.
Well, Ashildr. But saying it was about me makes it sound like a DW episode was written for me which is awesome
JA: Me was great. Typing that felt wrong to my writer instincts.
JC: Yeah I shuddered… Going with ashildr now.
JA: Ashildr it is.
Is it just me or did they make her look younger in the previous episode? She actually looked 18 in this one.

JC: I’m not sure… partly because I watched it pirated so it was slightly pixelly
JA: Don’t tell our readers you’re a criminal, please.
JC: I mean, uh, my TV was set to 180p for this episode.
But yeah. Maisie looked younger than 18 last time around.
JA: It would make sense because she’d presumably continuing “growing up” but wouldn’t experience cell decay/”getting old.” So she’d be 18-ish forever despite starting as a teenager.
JC: Sooo she’s a vampire.
JA: Basically.
Also, I ship her with Jack now based entirely off that one line.
JC: I totally didn’t expect Jack to get referenced and I loved that. Though I can’t not see her with Sam…
JA: That would work too. I really liked Sam.
Especially his gallows humour.
JC: Sam was hilarious and somehow got away with the dirtiest joke in NuWho history.
JA: Was it? Steven Moffat’s slipped in quite a few dirty jokes over his tenure.
JC: I feel like they’ve always been subtler than simply saying “well hung.” They’ve been things like you’ve kinda needed to infer, I think.
JA: That’s true. Moffat goes for a subtler brand of sex jokes.
He can use that as a tagline if he wants. It would look great on the back of a Blu-Ray boxset of… Well, just about any Moffat show, really.
JC: “a subtler brand of sex jokes, 4.5/5 stars” Rolling Stone
JA: I think this episode’s convinced me that the Doctor works really well solo. I’d be up for a companion-less series next year with guest characters like Ashildr and Sam instead.
JC: That’s what I plan on doing for my fanfic in season 3. And while I loved the lack of Clara (and this episode’s convinced me I don’t really like her) I loved her scene at the end
It felt so restrained and subtle, yet I totally got all their emotions in a way I haven’t before… I don’t know. I just loved the writing this week

JA: I do feel obligated to point out the weirdness of the Hundred Years War line as another flaw along with the evil space lion.
(Editor’s note: To be fair, Jaden had already pointed this out in a message he sent to JA before the actual conversation. But JA had also independently noticed it before Jaden told him and wanted to sound smart by being the one to bring it up.)
Agincourt wasn’t the end of the Hundred Year War.
AND a woman WAS involved in ending the Hundred Years War. She’s probably the most famous person to participate in it. The only other contestant being Henry V.
JC: You beat me to it. That line did hurt my historian hurt. It’s seriously the ONE war I can think of where the most famous participant was a woman
JA: They could have said so many things instead.
The Crusades.
The Battle of Hastings.
The list goes on.
JC: War of the roses, battle of sterling bridge, battle of tours, etc.
That’s two in a row, guys. Get your history shit together.
JA: At least this time it was just a one-off line, not a major plot point. I’ll forgive this, but not electric eels. Some things can never be forgiven.
JC: For me it’s the egg moon. I seriously think that one episode made me like the entire series less.
JA: There are a lot of things I won’t forgive. Egg moons. Paving-slab faces. Magic trees. I’m having traumatic flashbacks now.
Moving on, I think the stand-out scene for me was the Doctor reading Ashildr’s diary.
The bit with her children dying… That was really dark.
JC: Sad, dark, but really good. I think the diary bit was probably my favorite as well. Loved all the conversations really. Both between the Doctor and Ashildr and the Doctor and Clara at the end
JA: This episode had some great conversations. If it counts as a two-parter, it’s the biggest improvement I’ve seen between the first episode and the second.
Does it count as a two-parter?
JC: I feel like this is going to be one of those little things people argue about for years. I’m going to say no. Different writers, different plots.
JA: I’d actually agree. Darn it. Why must we have the same opinion on everything?
JC: Well I do think we’ll end up with differing scores for once. I really only have two complaints and one of them I’m pinning on contractual obligations
JA: If the writers are contractually obligated to put in monsters (and I see no evidence of that), I think they should also be obligated to make them good. The climax of the episode went by really fast with very little sense of danger. It just felt generic when it could easily have been a lot better.

JC: I’ve been convinced of it since Father’s Day. And while I do think the aliens weren’t great as I said I’m letting them slide since this wasn’t an alien invasion story.
JA: My “quick fix” to the script: make the portal into another dimension not open onto a starscape with planets and spaceships. Make it open onto a hellish, Lovecraftian dimension. Make it really terrifying. Replace the laser bolts and spaceships with screaming shadow creatures.
Take the lion make-up and save it for something else. I liked it, but it wasn’t a good fit. Instead, have a human form- mysterious, charismatic. And then when the portal opens we see it for what it really is: a demonic Clthulu-esque Thing.
It’s a little generic, but I think it would have worked better.
JC: It would’ve. Well, I mean, anything’s better with Cthulhu, but it would’ve been better. The darn lion is probably keeping this episode from a 10 singlehandedly
JA: I feel like the lion would have worked well in another story where the aliens were developed more. It looks very much like an updated version of the Tharils from Warriors Gate, which is a great Tom Baker episode. My brother and I were actually convinced they were the same. This episode needed something that could make a strong impression with limited screentime and the lion just couldn’t cut it. That part of the plot really is the only thing holding this episode back from being the best of this season so far.
JC: I think that about covers it then, but before we go into scores and final thoughts, there’s something about next week’s episode we should talk about, I think.
JA: And what would that be?
JC: Did the BBC just forget that Osgood was supposed to be dead or do they know no one cares about her?
JA: They announced she was coming back a while ago.
The story looks to be a sequel to Day of the Doctor, and I suspect one of the Osgoods is a Zygon.
Not sure if it’s the dead one or the alive one.
JC: I guess that’s the case. But man, I made a point to avoid all those announcements so that I could actually be surprised when these things happen.
JA: Sorry. I am surprised the trailer isn’t treating it as a Big Deal.
In other announcement Doctor Who news, I felt that for the sake of sheer weirdness I had to mention that apparently a movie called K-9: Timequake is being made without BBC involvement and features K9 versus Omega. I have no idea what to make of this, but I felt I couldn’t not bring it up.
JC: That sounds… um…
JA: Um just about sums it up.
Doctor Who really screwed up not using Omega before this movie.
Ancient, god-like Time Lord enemy should have been a no-brainer for a season finale. But instead we get a K-9 movie.
JC: Sorry I’m still pretty much just “umm”ing
JA: When you’re done “umm”ing, shall we do the scores?
JC: Um…
okay.
So this was close to the best episode this year for me, but not quite better than the opener. The lion and the agincourt line are pretty much the only things holding it back. Other than that, it was a fantastically written episode which felt a lot more restrained and nuanced than usual. Easy 9 out of 10
Although now I’m seeing that I actually gave the opener an 8 yet I said I liked this one slightly less…
JA: I have a similar overall opinion, BUT the lion plot not working (particularly the climax) really did a lot of damage to the episode for me. With that foxed, it would have been a 9. Instead, I’m afraid that I have to give it a 7 on the Kilmer Scale.
JC: Yay, different scores.
JA: Two points difference! We have defied the hive mind!
JC: I’m going to either slightly downgrade this one or slightly upgrade my rating on the premiere, but either way it’ll be at least a full point and a half difference lol
JA: Since your scale has 9 as “Really good,” which is above “No major complaints” and just below “All time favorite,” I’d say you might want to lower this one. I clearly have a better understanding of your rating scale than you do.
JC: Fine, it’s a wibbly wobbly 8.
JA: Still, one point different!
Hooray for non-conformity!
For more attempts at non-conformity, join us next week for our discussion of The Zygon Invasion!

2 thoughts on “Doctor Who Discussion- Contractually Obligated Monsters, Joan of Arc Doesn’t Exist, and It’s all about Me”